Forecasts
Forex Guides
Members
CloseClick to skip loading
Skip to content
Hello koala king and folks.
Good day to you.
The draft budget for next year in Greece which has cabinet approval on Sunday strive to reduce its budget deficit. Meanwhile it is expected that the unemployment crisis in this country at the end of 2011 will reach 15.2% and in 2012 to 16.4%. At the same time interval, a negative growth of 5.5% and 5.2% respectively in Greece will be experienced. An economist mentioned that the huge budget deficit remains a problem.
Spanish unemployment rose to 2.32%. Published official statistics show unemployment in the country due to the end of the tourism season will increase. Spain’s unemployment rate will be highest in the third quarter this year. Spain’s debt crisis in the euro area is also implicated three years ago because of the severe downturn in the building industry which is the backbone of its economy. Spain was involved in the crisis of unemployment and tens of thousands of semi-skilled workers in this field joined the unemployed.
Moody’s downgraded the credit rating of Italy and mentioned that this is in response to the current debt and economic situation of the country. Italy remains one of the most indebted countries in the Euro Zone.
Euro zone finance ministers meeting in Luxembourg ended without reaching a conclusion on the financial crisis in Greece. Discussions regarding the arrangement of the second aid to Greece and the involvement of the private sector were reported. According to Greek authorities, the country’s budget deficit in 2011 and 2012 will reduce but the goals set by the Europe Union and the International Monetary Fund could not be reached. 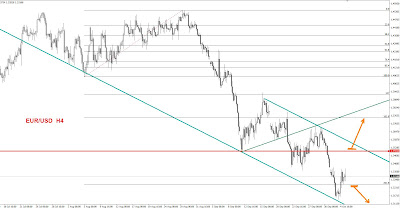 From a technical perspective:
As I said in the weekly analysis and expected, the EUR/USD continued to fall. Given the fundamental market conditions and also the market’s risk aversion, the main trend of the currency pair is still falling. Having said so, a correction may be due soon after such an extended bearish push. While the EUR/USD is below 1.35, the main trend is bearish and should the currency pair close above this level it is the first sign of change trend.
Have a nice time.
Masoud.
Masoud is a businessman and a Senior Forex Koala. Connect with him at our page on Facebook.

Related Forex Articles from the Koala Forex Training College.
Invest In Yourself And Get Premium Analysis