Forecasts
Forex Guides
Members
CloseClick to skip loading
Skip to content
Hello koala king and folks.
Good day to you.
Member countries of G20 leaders had a meeting in Cannes and had an agreement to implement a plan to increase economic growth and to bring about a balance in the global economy. Nicolas Sarkozy, French president at a news conference at the G20 meeting said: “We will fight to defend Europe and the euro.” He also said that the 20 members have agreed to increase the IMF’s financial resources but the details are to be finalized in February. The increase in IMF resources is a positive step to help solve the economic crisis in the euro area. However it is still not known where the resources will be deployed. Countries like America and Great Britain have emphasized that this will not help. Mr Sarkozy also said France and Germany want to determine the tax for foreign currency transfers and both countries hope that this tax will be implemented in 2012.
Mr Barack Obama, America’s president said that they welcome the decision by China to increase yuan flexibility in the rates. America’s President added that the increased flexibility of the yuan rate is something that was hoped for a long time and it is something that is a vital step in increasing the economic growth.
The Greek Prime Minister said the plan to hold a referendum on the Europe Union financial aid to Greece will be withdrawn.
The new European Central Bank ECB chief Mario Draghi in the first meeting of the Council of Europe decided at the meeting that to help solve the debt crisis in the euro zone, interest rates were to be reduced from 1.5% to 1.25%. Mario Draghi told reporters that the economic outlook is still surrounded by many uncertainties and exposed some serious risks. So the hope to achieve the forecast of GDP growth will not be in 2012.
Despite the slow economic growth of America, the US Federal Reserve announced after a two-day meeting that the reserve’s current monetary policy continues. Thus the policy makers with 9 votes in favor out of 10 votes kept interest rates unchanged and it’s probably until mid-2013 before the between zero and 0.25% interest rate is charged.
On Friday the most important economic news, the US NFP is released and it was worst than expected. However the unemployment rate is 0.1% lower than the previous period to reach 9.0%. 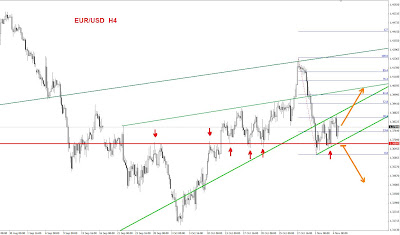 From a technical perspective:
As you can see in the above picture, the EUR/USD is located within an bullish channel. On the other hand, the range of 1.3680 is a strong support. In my opinion, as long as the currency pair is above 1.3680, the main trend is upward. The first target is 1.40. If the EUR/USD breaks below the bullish channel and close below 1.3680, it probably will come down to 1.34.
Have a great weekend.
Masoud.
Related Forex Articles from the Koala Forex Training College.
Invest In Yourself And Get Premium Analysis