Good day to you.


The US Federal Reserve which is the central bank of America, together with five other central banks, namely European Central Bank ECB, Bank of Canada, Bank of England, Bank of Japan and Swiss banks coordinated to inject liquidity into the financial system. This is to reduce stress in the world financial markets.

Recession in the euro area is expected as the indicators of the manufacturing sector in the seventeen-nation euro zone dropped and reached the lowest level in three years. Only German companies could increase their production levels.

Mario draghi, president of the ECB mentioned that Europe’s banking system outlook was grim. However he promised that if politicians next week agreed on more stringent solutions, the banks would play a larger role in resolving the debt crisis of the Eurozone countries.

Finance ministers from the euro area countries agreed on new measures to increase the capacity of the aid fund and more details of it will be revealed during the finance ministers’ meeting in Brussels.

Germany and France have said the debt problem will require reforms in the euro area countries. It is necessary that the seventeen-nation European Union take immediate steps to restore confidence to the financial markets. Germany and France want the euro area member states to sign a treaty with binding commitments on measures to avoid a massive budget deficit. 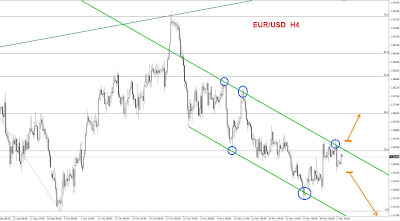 From a technical perspective: The EUR/USD in H4 time frame is still in a downtrend channel. If the currency pair can break the upper channel line and close above 1.3520, it is the first sign of change of a temporary trend from bearish to bullish. The currency pair is likely this week to continue the downward trend and may come down to 1.3120


Have a nice time.


Masoud is a businessman and a Senior Forex Koala. Connect with him at our page on Facebook.