Forecasts
Forex Guides
Members
CloseClick to skip loading
Skip to content
Hello koala king and folks.
Good day to you.
Preliminary economic survey shows that Chinese companies are experiencing a significant decline in November. The decline in the past 32 months compared with the status of the Chinese economy is a new record. Recession threatens the world’s second largest economy as stock markets in the world decline.
America’s economic growth rate in the third quarter this year was slower than what was predicted. While GDP growth of 2.5 percent for this quarter was expected, America’s GDP grew by only two percent. America’s efforts in recent years were expansionary policies and economic incentives to help the country’s economic growth. However rising oil prices, rising energy costs and decreased consumers spending is plaguing the efforts.
America’s debt ceiling in relation to its budget deficit has issues that still remain unresolved and the Special Committee composed of the Democratic and Republican parties failed to agree on it. Mr Barack Obama on Tuesday said that congress still had not achieved consensus on this issue but did nothing to prevent it. According to experts, the solution to America’s economic crisis is national understanding and mutual agreement.
Fitch Credit Rating Agency cut the rating of Portugal’s long-term loans. The cause of this decline is due to rising debt of European countries and the announcement of the probability of recession in Portugal.
Tensions are still felt between the various Euro Zone countries with regards to the approach to the budget deficit crisis. For example Germany is not in favor of a single Euro Bond. Agreement cannot be reached completely regarding the emphasis of the European Central Bank ECB involvement on bond purchases to support the Euro Zone economy.
Standard & Poor’s on Friday announced that Belgium’s credit rating is reduced. It believes that the Belgian government debt had reached a high level and there may be a possible future crisis. 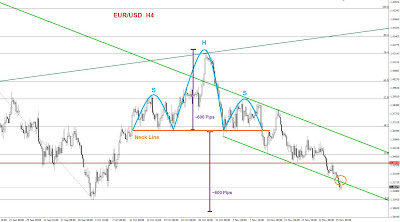 From a technical perspective: As I said in the last weekly analysis and expected, the Euro was weaker against the US Dollar and dropped. The currency pair in time frame H4 has broken the downtrend channel line. The EUR/USD forecast target of the head and shoulders pattern has not been reached. As you can see in the above picture, I have been identified the target range. Until the EUR/USD is 1.3415, the main trend is bearish.
Have a great weekend.
Masoud.
Masoud is a businessman and a Senior Forex Koala. Connect with him at our page on Facebook.
Related Forex Articles from the Koala Forex Training College.
Invest In Yourself And Get Premium Analysis