Forecasts
Forex Guides
Members
CloseClick to skip loading
Skip to content
Hello koala king and folks.
Good day to you.
According to the Statistical Center of Europe, business conditions and economic activity in the euro area in the final months of this year is better than it was before. The Purchasing Managers Index which is the performance of the enterprises is still less than fifty. The index of 47 in November rose to 47.9 in December.
Central Bank of Finland on Thursday announced a reduction of its forecast for economic growth in the next two years. The bank’s view of next year’s GDP growth forecast was changed to 0.4 percent from 2.6 percent. The bank mentioned that the debt crisis in the euro area countries has affected the exports and consumer spending causing the economic slowdown.
It is believed that France’s economy starting with the New Year and before the presidential elections in April, will experience a slight downturn. The downside of GDP growth and the downturn in the economy of France may cause sixty thousand people to be unemployed in the first half of 2012.
Fitch Credit Rating Agency reduced the credit rating of seven large European banks. The debt crisis affected the banks of the euro area. A stock market expert mentioned that this suggests of Europe’s inability to do things right. A solution should include the European Central Bank ECB. Two U.S. banks Citigroup and Bank of America, are on the Fitch list. 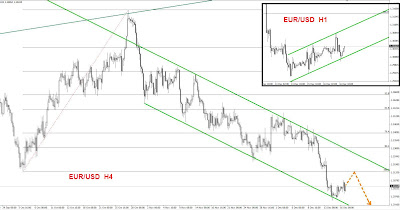 From a technical perspective: Downtrend channel in time frame H4 of the EUR/USD is still valid and the currency pair is still within in the channel. As I predicted in the midweek analysis, the EUR/USD after reaching the bottom of the channel responded. While the EUR/USD is located within the channel, the main trend is downward. The currency pair in time frame H1 is within a bullish channel and breaking the bottom line of this channel in time frame H1 is the first sign of the continued downward trend.
Have a great weekend.
Masoud.
Masoud is a businessman and a Senior Forex Koala. Connect with him at our page on Facebook.
Related Forex Articles from the Koala Forex Training College.
Invest In Yourself And Get Premium Analysis