Forecasts
Forex Guides
Members
CloseClick to skip loading
Skip to content
Hello koala king and folks.
Good day to you.
Germany’s strong economic performance in the industries resulted in an increase in the rate of economic growth in the third quarter of this year. However it is feared that the country may be affected by the debt crisis in the euro zone and the region’s largest economy in the near future may be impacted in terms of performance.
China’s annual inflation rate fell sharply in October and reached 5.5%. Despite low inflation, the rate remains higher than the level set by the Bank of China which is about four percent.
Italian short-term bonds on Thursday were forced to promise the highest profit in the past 14 years. In the past few days, Italy’s ten-year bond rate was more than seven percent. The rising cost of borrowing for the Italian government indicated that it is becoming the biggest concern for investors.
Union Commission for Europe predicts that the economic growth in the euro zone next year will be sharply reduced. Uncertainty for investors is high as the economy of Europe severely suffers from the problem of debt. Furthermore consumption and domestic demand will be affected by austerity measures.
According to the forecast released on Thursday, the 17-nation euro zone economic growth will be revised to 0.5 percent next year and in 2013 will reach 1.3 percent. Europe also reports that the employment market remains a major concern in the euro area. It is expected that the inflation rate in 2012 will decline to 1.7 percent which is then below the target rate of inflation of the European Central Bank ECB.
France is one of the six nations in the euro zone which has a credit rating AAA. However due to the French investment bank holdings of Greek bonds, France is facing difficult conditions. It is feared that the other members of the euro area will be implicated by an increase in deficit too. 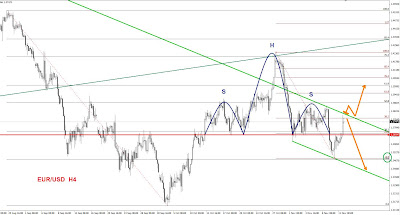 From a technical perspective:
As you can see in the above picture, the EUR/USD is located within a downtrend channel and on the other hand, the currency pair in time frame H4 formed a head and shoulders pattern. If the EUR/USD could break above the channel line, it is likely to rise to 1.4. However if the test of the upper channel line fails, it is likely to fall to 1.34.
Have a great weekend.
Masoud
Masoud is a businessman and a Senior Forex Koala. Connect with him at our page on Facebook.

Related Forex Articles from the Koala Forex Training College.
Invest In Yourself And Get Premium Analysis