German ten-year bond interest rate once again decreased. Germany as the safest economy in the euro zone, has the lowest cost of borrowing. The government succeeded on Wednesday to sell more than four billion euros of its debt securities with interest rates below 1.77 percent.

An expert in stock market in Frankfurt said that Spain is faced with many problems and a high volume of Spanish debt is stuck among traders and investors. Meanwhile, Spain’s major cities in recent weeks experienced strikes and protests due to people being fed up of the government’s economic program. The Spanish government’s budget for 2012 provided to the extremely strict. Under this program, approximately 17 percent of the budgets of all ministries will be reduced.

The Italian government on Thursday was forced to sell nearly three billion euros of its three-year debt securities at a higher interest.

World Trade Organization in Geneva on Thursday announced the reduction of trade growth in 2012. WTO chief said that once again in 2012 we are confronted with conflicting economic developments. According to the report, world trade growth this year will decrease to 3.7 percent compared with last year 5 percent. It is expected that world trade in 2013 will be partly improved and its growth will reach about 5.6 percent.

China’s economic growth will slow in the first quarter of this year. The slowest rate of economic growth in China in the past three years. GDP growth for China has experienced a downward trend in the past year and decreased from 9.7 percent in the first quarter last year to 8.1 percent of GDP in the same period this year. China is trying to reduce its dependency on exports and place greater attention on consumption and domestic demand. However it is feared that the economic slowdown will also reduce employment and increase unemployment. 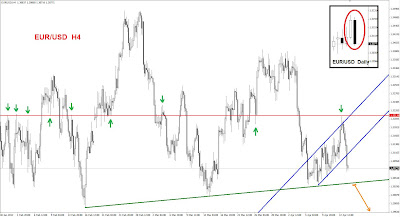 From a technical perspective: The EUR/USD has broken the uptrend channel. Given the picture above, if the currency pair could break the green line and it is closed under this line, then the target will be 1.2780. I believe it is not advisable to buy the euro against the dollar. The conditions are not enough for such a position.