At the beginning of the week was the fact that Europe and the International Monetary Fund would increase their aid to Greece and Greece also agreed that in accordance to their demands, to reduce the budget deficit and make changes to wages in the tax system. Although the Euro opened with a small upside forex gap, continued pessimism about the future plans to support the Euro caused the EUR/USD to drop.

I read from reports that in order to solve the Euro Zone problems, 660 billion euros to assist the stretched European countries will probably be needed. The current 110 billion Euro aid is only to Greece and concerns are mounting on the possibility of the crisis spreading to Spain and Portugal. ECB’s Weber noted the same concerns and that brought the EUR/USD to 1.28. Reduced credit rating of Portugal also escalated the risk aversion affect. Mr. Trichet also said that the economic outlook of the Euro Zone is unclear.

Fear of the spread of the debt crisis spreading to other countries cast a shadow on the financial markets. Traders were buying Yen and the US Dollar and the Euro fall sharply. Before the conference by Mr Trichet, there were speculation that ECB would take action to help Greece but nothing was mentioned. It is important to note that the Greek Minister of Finance mentioned that the bond redemption of more than 8.5 billion euros is due at the end of the month and without aid, Greece will not be able to pay.

Considering the intensity of the crisis, on Friday, it was announced that the Europe Union will use emergency funds to prevent the escalation of the crisis. However it was interesting to note that sentiments remained negative and even the good statistics of the US Non-Farm Payroll did little to improve sentiments.

Keep a close lookout for further developments. There are talks now about seeing the EUR/USD at 1.2 or in the far future, a parity of 1.0. The yen may further be strengthened. However as mentioned earlier, Finance ministers of the Euro Zone will be coming up with apparent concrete plans over the weekend to prevent the spread of the crisis. It was mentioned that with the opening of the markets, there will be a new will to defend the Euro.

The market may open with a forex gap in favor of the Euro, but probably majority of the traders will take this opportunity to short the EUR/USD at higher levels. Hence do be careful for this week. My analysis of Trichet’s remarks suggests that the crisis will soon reach both Portugal and Spain.

This week may be a week full of unstable and turbulent market conditions. In view of this, a technical analysis may be tricky due to the severity of the fundamental market moves. On a general note, basically any bad news from the area of Europe may present an opportunity to sell the Euro at the ceiling. You can see in the picture below the descending channel. 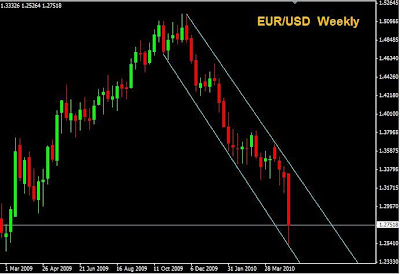 Masoud is a businessman and a Senior Koala. Connect with him at our page on Facebook.