The ECB on Monday started it’s first week of the program to buy government bonds. The plan is to buy up to16.5 billion euros worth of bonds to attempt to solve the debt crisis and help the Euro Zone.

The 2008 United States dollar injection project began with the ECB too but this time, governments and central banks are under difficult conditions and hence the market may move either direction. It is best not to rush in the sales of Euro transactions and monitor for corrections.

After the announcement of the ban on naked-short selling by Germany and as well as further concerns that the economic crisis would intensify in Europe, the Euro value dropped to it’s lowest in four years.

On Friday, German Chancellor Angela Merkel announced that Germany needs to strengthen the Euro but the currency’s long-term stability depends on political convergence.

I personally feel that the European Union is walking down a dangerous path. Measures to prevent speculators from the buying and selling of bonds on the market even in the short term, is a step in the wrong direction. Should everything be blamed on speculations, it may be denial of the reality. The European Union as of now seems to be still doing so. The current economic crisis in Europe is beyond the current stated reasons and this can be observed by the somewhat confusing decision-making from European leaders. Statistics painting a different picture from reality and denial will definitely not help.

The European Central Bank and Federal Reserve is likely to intervene to calm the market. This may cause the Euro to be associated with growth instead. However in my opinion, this is temporary as the intervention will probably not prevent the fall of the Euro. Instead the Euro may decrease slowly. It was mentioned that there is no imminent intervention and many analysts believe that the intervention will not occur soon and will only happen if the EUR/USD goes below 1.18 or 1.16. 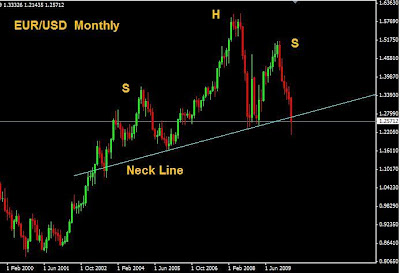 From a technical point of view, the Euro is in a crucial area. In the monthly (Picture 1), the Euro has a head and shoulders pattern and broke the neck line and is now located below the line. This level of failure due to the fundamental factors is very powerful. Although we may see short-term growth in the Euro, while it remains below 1.27 the long term trend is probably still bearish. Based on this chart analysis, going bullish on the US Dollar may be a choice. 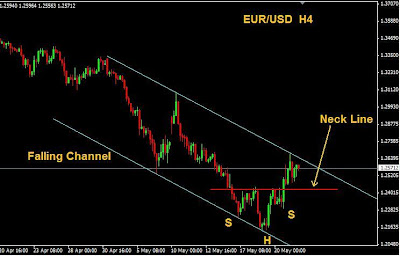 Masoud is a businessman and a Senior Koala. Connect with him at our page on Facebook.

If you are on Facebook, i urge you to join TheGeekKnows.com page. Discussions on forex opinions and trades can be found there.