In this week, generally improving economic conditions and clear signs of strengthening recovery in U.S. economic indicators such as the US NFP on Friday caused the economic prosperity and strengthening of the commodity market and commodity exchanges. This caused a limited rise of the US Dollar. (The Dow index had grown considerably and climbed with market goods. There was warning about the limitation of growth of the US Dollars).

The problem for the Euro seemed to be more complicated. Although the Europe Union Summit Thursday was completed, it was still rather ineffective in preventing the Euro from falling further.

Minot of the Federal Reserve was dovish and had suggested that the banking authorities should not rush to raise interest rates. Minot’s mild stance was negative for the US Dollar against the high-yield currencies.

A point to note that this time the Federal Reserve speech was not fixated on the issues of interest rates. This statement of Minot was made in March. A statement made last week before NFP was released. Bernanke reminded about the high unemployment rate and its threat to the improving economic growth.

In the Europe conference, Mr Trichet expressed hope that Greece would solve the problem of debt herself, requiring no help from Europe. These words of faith seemed to stop Euro descent for now, but these words were not concrete actions required by the markets. As the economic problems of Greece probably need more than a simple fix, it’s descending pressure on the Euro will probably reassert itself.

Another issue that attracted the attention of the market was the possible view of modern Chinese Yuan rate being un-pegged. After a search trip to China, the Treasury Secretary of America published an article in The New York Times that speculation about rate increases may cause a raise of the Yuan. Apparently, investors are now buying the Chinese Yuan. 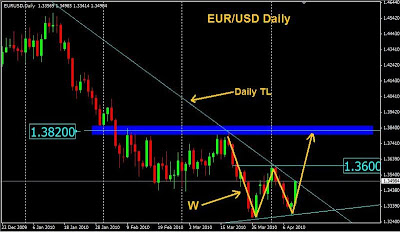 Masoud is a businessman and a Senior Koala