Europe’s central bank for the second time in the past two months avail of low-interest loans to European banks. Mario Draghi, president of the Central Bank of Europe ECB believes that the bank can not directly solve the debt crisis in the euro area but through economic incentives can assist to boost the economy of this region. This means that banks can lend to customers or buy government bonds.

Director of the Bank of England said that the idea of cheap loans to banks whereby in the long term banks will lend money to small businesses and thus leading to economic growth is not viable. What the banks especially in the euro zone countries, would do is that this money is reserved for compensation and alternative funding sources that are outside of the banks would still be sought after.

Winter led to an increasing number of unemployed in Germany and the country’s unemployment rate reached 7.4 percent in February. Meanwhile economic growth in Germany in the final quarter of last year fell 0.2 percent. Eurozone industrial production in manufacturing declined in February for the seventh straight month. Production index decreased in 17 regional member countries and unemployment is rising. Global slowdown resulting in a reduction of purchase orders and the financial crisis in this region is causing the manufacturing slump.

More than 112 000 people were added to the number of applicants for unemployment benefit in Spain in January and the unemployment rate reached 22.9% in this country. It has the highest unemployment rate among the seventeen-nation euro zone. Spanish Ministry of Labor announced that since February last year more than four hundred thousand jobs have been lost.

Twenty-five states and seven countries of the Europe Union signed a new financial agreement that a country’s annual deficit should not exceed half a percent of GDP of that country. There are other measures to this plan and the signatories will be fined for non compliance. Great Britain and the Czech Republic are two countries that have refused to sign the treaty. 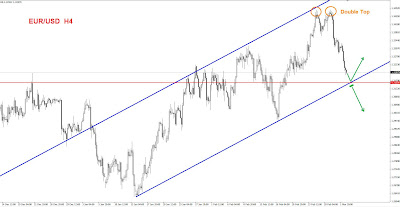 From a technical perspective: As you can see in the above picture,the EUR/USD after forming a double top will start to fall. The currency pair after reaching the lower channel line and also after reaching the 1.3150 resistance, will probably rebound. However if the resistance 1.3150 is broken and the daily candle closes below this range, the downward trend may continue until 1:30.

Last week was critical for world trade. Investors were waiting for important decisions to be made in Greece. In the end as usual, only more meetings took place. Markets expect a concrete decision from the European Central Bank on Greece but the ECB appeared to be undecided.

The possibility of the default of Greece is increasing every day. Analysts from Citigroup were reported to believe that the likely departure of Greece from the European Union over the next 1.5 years is at fifty-fifty. One analyst mentioned that if consensus on a Greek solution is not achieved, it would be disastrous for Greece.

In the monthly meeting of the ECB in Frankfurt on Thursday, contrary to what many market analysts expected, Mario Draghi president of the Central Bank of Europe at the press conference seemed reluctant to address the Greece issue directly. In another part of his speech he said that adding direct aid to Greece is prohibited under the Treaty on Europe Union regulation.

Cold weather and increased energy consumption is one of the main causes of inflation in Germany but other areas of the economy seems to be doing normal.

Chinese consumers experienced in January rising inflation. The rate of inflation in this country had been declining over the past five months but once again took an upward trend and reached 4.5%.

From a technical perspective:

Everything depends on the Greek voting outcome. In these circumstances we can not rely solely on technical analysis. But in general, while the EUR/USD is above the 1.30 level, the main trend is still bullish. As you can see in the above picture, both scenarios could happen.

The US Federal Reserve did not agree with raising interest rates and said interest rates in this country until 2014 will remain. This is done in order to further accelerate economic growth and to help the housing market too. Mr Bernanke, chairman of the US Federal Reserve has also announced that the unemployment figure is still bullish. However market prices have not seen inflation.

America’s economic growth in the final three months of 2011 has seen the fastest growth rate for sometime. However restoring the financial market and its exports early this year will be at a much slower rate. Graphs show the economy, the GDP of America, in 2008 and 2009 to -3.5 percent, and during 2011 to the average 1.7 percent, and in the fourth quarter of last year reached 2.8 percent.

The US Fed said this week that a full rebuild of America’s economy needs at least three more years. The percentage of unemployment is still growing. American consumers will spend money in this period from an increase of 1.7 percent to 2 percent. Much of this trend was due to increased sales of new cars which in the fourth quarter rose nearly 15 percent.

International Monetary Fund warned on Tuesday that America’s economy as well as other advanced economies “in front of the overflow of the debt crisis in the euro area is vulnerable.” Officials and economic experts attending the World Economic Forum in Davos were seeking to ensure that before the debt crisis in Europe takes down the global economy, action to resolve this crisis is taken. Europe’s problems will impact even the countries with strong economic growth such as Russia, Brazil, India and China.

Christine Lagard, president of the International Monetary Fund warned that government action to reduce current costs can lead to the reduction of economic growth. Ms. Lagard said that austerity plans can not be uniformly implemented in different countries and each nation’s own situation is unique. Mr Geithner, Treasury Secretary of America said that more restrictive policies without proper planning can trigger a vicious economic downturn but for parts of Europe, excluding debt relief will not be a solution. However George Soros, an American billionaire says that contractionary policies backed by Germany in the crisis-stricken countries of Europe which crisis might be caused by a decade of economic stagnation in Europe may cause destruction to the Union.

From a technical perspective: Last week, the EUR/USD continued its upward trend. While the EUR/USD is above the 1.2960 level, the main trend is upward and if it closes below 1.2960, it is a sign of a change in trend. The EUR/USD is located within an ascending channel. The currency pair has been rising to the ceiling channel. You can see in the above picture.