The Chinese government forecasts for economic growth in 2012 decreased. China is trying to reduce its dependency on exports and international markets and pay more attention to consumption and domestic demand in the country. The Chinese government predicts that economic growth this year will decline to 7.5 percent. China’s economic growth in 2011 was 9.2% of GDP. This figure in 2010 had reached more than 10.4 percent. The country’s inflation rate last year reached more than 5.4 percent and the Chinese government plans to stabilize the inflation rate below four percent. Increasing inflationary pressures is a major concern for Chinese leaders. However it is feared that the economic slowdown will also reduce employment and increase unemployment. 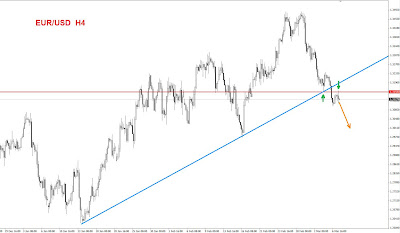 From a technical perspective: Given the market’s fundamental symptoms can be seen as market risk aversion. As you can see in the above picture,EUR/USD after breaking the trend line and also break the 1.3160 resistance had a little correction upward. After which  it probably will goes down to 1.30.

Have a nice time.