While the Greek government fights for economic reform, the people of Greece protest against the Greek Ministry of Finance. The Greek Finance Minister said that while conditions are very difficult now, should the worst happen the consequences will be unimaginable and hence avoiding it is important. To win the confidence of international lenders, the Greek government needs to implement stringent economic programs.

Nicolas Sarkozy, French president said that Greece has only a few days to show compliance with the conditions for granting financial aid to rescue the Greek economy. The Greek government still has not won the support of Parliament.

According to the Statistical Center of the Euro-zone, the implementation of austerity programs to reduce the budget deficit and the increase in production caused the reduction of debt in the third quarter of last year for the seventeen-nation euro zone. Euro zone government debt of 87.7 percent of total GDP declined to 87.4 percent of GDP. Italy’s debt had declined in this period while the Spanish government debt was unchanged. The Hungarian government debt rose sharply in Europe.

North Sea Brent oil price of around 116 dollars a barrel reached on Tuesday. Unexpected and severe cold weather in Europe, concerns about Greece’s debt crisis, financial future of the euro area and America intensified sanctions against Iran were probably reasons for the increase in oil prices. 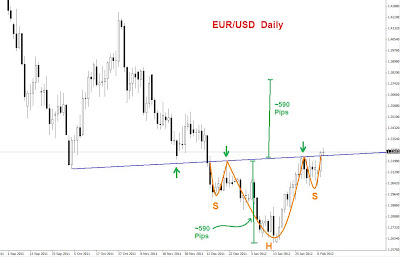 From a technical perspective: The EUR/USD after about ten days rest, again began to climb. There is a notable forming reverse head and shoulders in the daily time frame. The first target is to climb to 1.3330 and if above 1.3330 closed, the second goal is to reach the target head and shoulders pattern. (About 1.38).

Have a nice time.