At the beginning of the week, conflict between the US and China over the value of Chinese Yuan as well as the blunt Prime Minister of China who spoke about the economic crisis and concerns about the US Dollar probably caused risk aversion to surface.

While Asian stocks were declining, due to apparent better economic conditions in the United States and the increased consumer confidence in US equities, the highest rate in the past 17 months was achieved.

After the statement and the continuance of low interest rates by the Federal Reserve, the first reaction brought about a sale of US Dollars and it further weakened. However the bond market did not significantly change. The Bank of America was also bearish against the dollar as interest rates remain low. However eventual market reaction did not show this view.

Central Bank of Brazil on Thursday in an unprecedented move decided to increase its US Dollar reserves and that contributed to an atmosphere of risk aversion.

At the same time the government of Greece’s request for aid from Europe and the subsequent controversy concerning the differences of France and Germany with regards to how the Greek solution should be intensified the atmosphere of risk aversion and that caused an increase in value of the US Dollar against the high-yield currencies.

Now all eyes to are on Europe and in particular Greece. If Greece is to declare bankruptcy, the Euro will face serious consequences, including the bankruptcy of many German banks. German banks hold the most debts of Greece. A significant threat to the existence of the Euro currency.

As I said last week, the possibility of a strong US Dollar is up and one should not without reason sell US Dollars. Now buying US Dollars on top resistance is possibly low-risk compared to selling. I am looking at selling the EUR/USD on the top resistance. 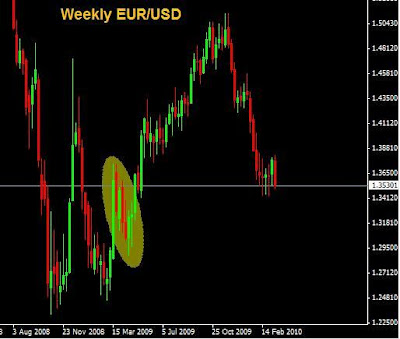 Last but not least, I will like to congratulate Nowruz (21 March)(Happy New Year of Solar Hejri 1389) to the all Iranian and people of Turkey, India, Azerbaijan, Tajikistan, Uzbekistan, Afghanistan, Kazakhstan, and Pakistan.

Masoud is a businessman and a Senior Koala at the Forex Factory Koala Thread.

Visit our new home at facebook and be a fan.