Welcome to a new series under the Koala’s Learn Forex Trading Training College.

These mistakes are the ones that can cost you your forex trading accounts. Yes. A margin call.

First in this series is about the tenancy to attempt to pick tops and bottoms. This is a common forex mistake made by many and it often results in poor performance leading up to a total wipeout of a forex trading account.

To understand the problem, let us see why people tend to do this.

Let us take a look at the counter arguments to the statements above.

Now if you still want to pick tops and bottoms, to increase your chance of success you should always bear these points in mind. 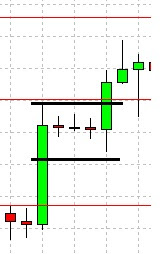 Take a look at the chart on the right for example. After a strong bullish momentum, the currency pair stalls. Inexperienced traders may see it as an indication that the currency pair is due to reverse. This stalling can be due to one of the many reasons as we discussed earlier.

To increase the chance of success, one should enter a position probably only after the currency pair goes beyond the lower line as a sign of confirmation that a reversal is probably happening.

A stop loss can be placed around the top line as similarly, if the currency pair moves beyond the region upwards, this trader has probably failed to pick a top.

The bottom line is that it takes more than just simple guesswork and visual should bes to pick tops and bottoms. If you really must do so, remember the pointers discussed above to increase your chance of success.

>> Next in the Forex Mistakes Series ( Over Trading )


Invest In Yourself And Get Premium Analysis

Do NOT follow this link or you will be banned from the site!