Forecasts
Forex Guides
Members
CloseClick to skip loading
Skip to content
Good day forex traders.
Having a good weekend? It is slightly overcast for me and i miss the warm sun!
In the previous EUR/USD review, we noted that the bullish momentum continued and had since brought the currency pair higher. It faced 2 strong technical resistances which are the 1.42 region and the SMA 200. The 2 cents gain by the currency pair was believed by many to be too fast and some traders were looking out for a technical bearish correction. Fundamentally the markets were encouraged by recent developments such as an agreement to boost the Euro Zone rescue fund to 1 trillion euros and the persuasion of bondholders to take 50 percent losses on Greek debt. 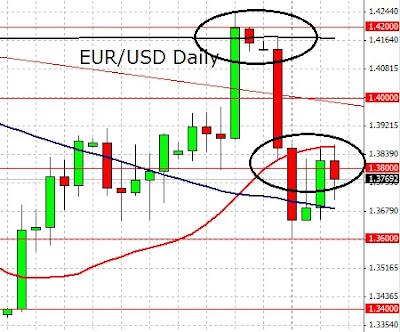 Technical Analysis
Observing the EUR/USD chart above, the strong resistances of 1.42 and SMA 200 mentioned last week did fulfill. This call for a I LOVE IT WHEN MY CHART WORKS 🙂 moment !
SMA 20 = Flattening
SMA 50 = Flattening
After a sharp dip which erased the 2 cent gain and more, the currency pair is settling into a technical consolidation for now. SMA 20 and 50 are both flattening and this suggests a lack of sustained momentum. An interest thing fact to note is that the SMA 200 which is used to suggest long term momentum is slowly round a top.
Fundamental Analysis
In a move that left many analysts and market experts baffled, Greek Prime Minster George Papandreou decided to call for a referendum on Monday on the latest EU bailout deal. Widely believed to be the direct cause of the sharp dip in the euro value, the markets took this very negatively. Greece is in a very crucial situation and the decision to let largely disgruntled citizens decide on the bailout is considered by many questionable, dangerous and perhaps irresponsible to the global financial community as a whole. This also damages the credibility of the European Union as this would leave decisions already made in limbo.
The move by the European Central Bank to cut the euro interest rate also lowered the confidence on the euro currency as signals were given that it is believed that the euro zone is heading towards a mild recession. Italy, having the second largest debt in the euro zone increasingly comes under fire as concerns regarding an uncontrollable debt crisis continues to escalate.
While the Greece prime minister did signal that a referendum won’t be called after all later in the week, the damage to credibility and sentiments was already done.
Over in the US, a worst than expected gain in jobs highlighted the less than desired painfully slow growth of the American economy.
Besides the usual economic releases, the focus next week would probably be the aftermath of the G20 meetings and the continued developments in the Euro Zone.
Trade safely as i foresee continued stormy waters ahead! Proper money management is a must.
Trade Safely.
Related Forex Articles from the Koala Forex Training College.
Invest In Yourself And Get Premium Analysis