Forecasts
Forex Guides
Members
CloseClick to skip loading
Skip to content
Good day forex traders.
How is everyone? Am sick for a week now and honestly in my opinion the best wealth is health!
In the previous EUR/USD review we noted a bullish correction since the test of 1.32. The bullish momentum is strong as it managed to break the resistances of the SMA 20 / 1.36 / 1.38 within a week. From a fundamental analysis point of view the Euro was soaring due to renewed optimism that the budget deficit crisis of the euro zone would be over soon. Vows to ensure stability and the capitalization of euro zone banks were taken favorably by the markets. Having said so, one must continue to remain vigilant towards the possibility of any adverse developments. After all the debt situation in the US is not getting any better for now. 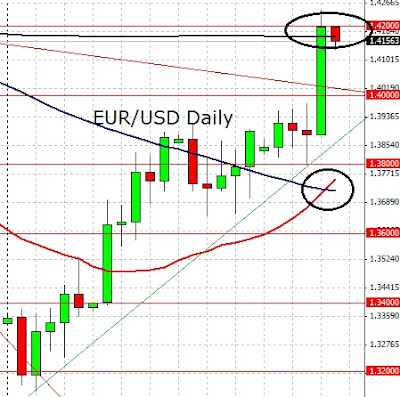 Technical Analysis
Looking at the EUR/USD chart above, we noted that the bullish momentum continued and had since gained a fair bit.
SMA 20 = bullish
SMA 50 = bearish
The SMA 20 has crossed the SMA 50 and we should be looking out for the SMA 50 to turn bullish too for the possibility of a sustained bullish momentum.
The EUR/USD is now facing 2 strong technical resistances. The 1.42 region and the SMA 200. The 2 cents gain by the currency pair during the later part of the week is believed by many to be too fast and there may be a technical bearish correction.
Fundamental Analysis
The markets are currently in euphoria as the recent crisis submit brought about an agreement to boost the Euro Zone rescue fund to 1 trillion euros. Bondholders are also persuaded to take 50 percent losses on Greek debt. Recapitalization of European banks were discussed and the International Monetary Fund IMF may play a bigger role. Regardless the situation remains fragile and bond prices in the Euro Zone remains elevated. A number of economists believe that this only buys time. In the meanwhile, the Greek government continues to struggle through the implementation of austerity measures.
Over across the Atlantic ocean, the US continues to build up an ever increasing debt. Many experts believe that the point of no return ie eventual default has already been surpassed. The upcoming week is important as the Federal Funds Rate will be released together with the US Non-Farm Payroll at the end of the week. Unemployment continues to be a drag on the US economy.
In China a shuffle of the financial and securities regulators was done as part of a process to hand power over to a new generation. It was reported that according to estimates by PricewaterhouseCoopers LLP, China will surpass the US in gross domestic product by as early as 2018. This will result in China becoming the world’s biggest economy.
Trade Safely.
Related Forex Articles from the Koala Forex Training College.
Invest In Yourself And Get Premium Analysis