As we take a break from trading for the weekend, i hope everyone finished green. Remember that money is hard to come by. Never risk excessively and never risk what you cannot afford to lose.

In the last EUR/USD weekly review, we noted that the German Chancellor mentioned that she was not going to release the Greek aids funds until the country displayed a “sustainable, credible” plan to cut the budget deficit. This was potentially complicating as Greece’s citizens were already upset with the cuts so far and generally felt that they shouldn’t be made to bear the consequences of the government’s poor financial policies. S&P believed that the outlook was negative for Greece. 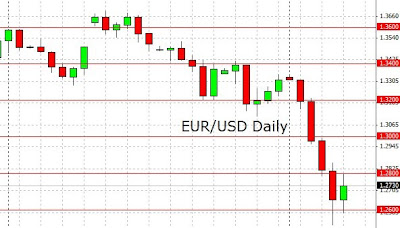 The start of the week brought us hopes as Greece accepted a $145 billion aid solution from the IMF and the Euro Zone partners over the weekend. This plan was supported by the ECB and Greece promised to reduce 30 billion euros in the budget and to cut the deficit from 13.6% of the gross domestic product to within the European Union limit of 3 percent in 2014. Although this sounded positive, investors were worried of possible complications. There were growing speculations of Spain and Portugal facing budget deficit problems. Risk aversion was rampant.

As we approached towards mid week, the strikes in Greece escalated and became worse. The death of 3 people as a result of riot fires shocked the financial markets and further plunged sentiments. Although the Euro minimum bid rate remained the same, ECB apparently resisted pressure to take new measures to combat the Euro Zone’s escalating deficit crisis. Trichet felt that European officials should increase their budget deficits. Investors did not take this lightly and were concerned that the crisis spiral out of of control. Sentiment was so bad that the risk aversion pushed the EUR/USD below 1.26.

On Friday, US Non-farm payroll figures came in better than expected. While a number of investors felt that this was very positive, a closer look at the figures indicated that the unemployment rate had increased to 9.9%. This was probably due to the increased number of job-seekers. The currency pair eased slightly, closing at 1.2730+/- for the week.

A report came in today that European leaders decided to set up an emergency fund to stop the spread of the Greek deficit crisis. European leaders were concerned about the sell off of the Euro witnessed throughout the week, probably due to a loss of confidence in the monetary unit. The European Commission President was reported to have commented that “We will defend the Euro, whatever it takes.” This is an indication of resolve but investors may be apprehensive towards the amount of mere talk versus concrete actions. With the recent frequent occurrence of forex gaps, this display of resolution may change expectations and result in a shift in prices.

Although the US is enjoying a period of relative recovery in recent times, the extreme negative sentiments this week affected the S&P 500 too, sending it down past several support lines. We must remember that the US is receiving a “negative sentiment” break probably due to the focused attention towards the Euro Zone crisis. The US employment market remains weak and a recent report stated that the number of banks closed in the US this year has reached 68.

With the threat of the worsening conditions in the Euro Zone, the developments surrounding it will probably remain pivotal towards market developments. We are close to the 2009 low of 1.2450+ and a test of it is not unlikely should conditions worsen.

Next week brings us a number of crucial data releases including the German Preliminary GDP, US Trade Balance, US Retail Sales and more. You can find the list of the various economic releases in the Economic Calender below.

Trade safely and remember to plan your trades well.