Forecasts
Forex Guides
Members
CloseClick to skip loading
Skip to content
Good day forex traders.
Did you have a good trading week? I hope everyone is green with pips! Do remember that even 1 pip gain is still a gain and hence never take excessive risks.
In the previous EUR/USD weekly review, we noted that the consolidation continued. Both SMA 20 and 50 are flat. Seeing such, a sustained momentum was probably not around the corner. Recent developments in the Euro Zone was bringing hope to the markets. Equities around the world rallied. Governmental changes in Italy and Greece brought about optimism. The situation of Italian bonds brought about concern as the 7 percent threshold saw Greece, Ireland and Portugal sought financial aid previously. 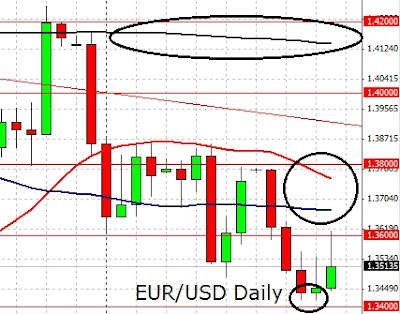 Technical Analysis
Looking at the EUR/USD chart above, we note that the 1.34 support region held. Historically this is a strong support and resistance S&R region and hence this comes with little surprise.
SMA 20 = Downwards
SMA 50 = Flat
With the SMA 20 downwards now, watch out for a crossover of the SMA 50 and the SMA 50 itself turning downwards for a further possibility of a bearish trend. The long term SMA 200 is increasing it’s decline and suggests increased possibility of a longer bearish trend.
Fundamental Analysis
As mentioned in the previous review, currency pair movements would probably follow the Euro Zone budget deficit crisis developments. Over the week, concerns ran high as borrowing costs for Italy and Spain surged. The Finnish Prime Minster was reported to be saying that the European Union is running out of solutions to correct the crisis and Italy and Greece will need to show that they can implement necessary austerity measures so as to convince the markets. It was reported that the International Monetary Fund IMF would not release the next portion of its loan until the Greece Prime Minster garnered broad political support for the austerity measures.
It was reported that the European Central Bank ECB bought Italian and Spanish government bonds and this probability caused the late week rally of the Euro. Having said so the opposition to increasing rescue measures for the troubled Euro Zone countries is increasing. It was reported that the German Chancellor opposed French calls to implement the ECB as a lender of a last resort. Both Germany and Finland both opposed to issuing common euro bonds as a solution to the crisis.
There is concern in the markets regarding the possibility of a failure to agree on a US deficit reduction package by the Nov 23 deadline. While the US consumer spending probably increased, watch out for the release of the Federal Reserve meeting minutes on the 22 Nov for more insights to their views on the need for further measures to improve the economy.
Expect the currency pair to probably mirror the developments in the Euro Zone.
Trade Safely.
Related Forex Articles from the Koala Forex Training College.
Invest In Yourself And Get Premium Analysis