In the last review, we noted a forex gap of more than 100 pips due to the decision by the European Union to embark on a crisis aid plan to assist as much as almost 1 trillion dollars to the worst hit European nations. The ECB stated that it would ease severe strains in certain markets by purchasing government and private debt. Having said so, sentiments grew negative as investors were worried about the adequacy of the emergency lending plan. They also speculated that due to the amount of this aid plan, the European economy might be dented badly. Towards end week, rumors surfaced regarding the break up of the Euro Zone. These highlighted the extremely negative sentiments. 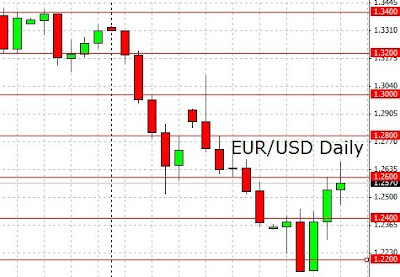 Looking at the EUR/USD chart above, the currency pair hit a low under 1.2200 and had since recovered ending the week bullish.

Early last week, the premium for insurance against a drop in the Euro was the highest in more than 7 years. Concerns plagued sentiments as investors worried about the erosion of the Euro. Global stocks and commodities fell in value. Rising borrowing costs among banks suggested a similar situation like the 2008 crisis might be happening if the situation got worse. When the European Union transferred 18 billion to Greece, the EUR/USD did not recover as investors felt this only merely delayed any risk of a default. They were also concerned that Germany’s role in the aid solution might be opposed by the German lawmakers. Talks of a possible parity with the US Dollar surfaced.

By midweek, the EUR/USD had tested below 1.2200 probably as a result of risk aversion caused by the imposed ban on naked short-selling by Germany. Investors were uncertain of the complications and probably withdrew from riskier assets. However once the initial thoughts were over, the EUR/USD recovered as that was an indication of more support for the Euro. The German Chancellor also mentioned in parliament that Germany would suggest to the European Union measures including budget cuts, concrete penalties for rule breaking and the orderly insolvency of European Union nations. With the weaker Euro, reports stated that the manufacturing industry of the Euro Zone was improving. To further brighten the Euro proposition, foreclosures and mortgage delinquencies in the US broke records, bringing investors back to reality that the US economy was not as robust as believed.

Towards the end of the week, poorer than expected US figures gave the markets more reason to improve on their sentiments of the Euro versus the US Dollar. US unemployment claims brought disappointment and a leading indicator indicated that the recovery might slow down in the second half of the year. Investors were beginning to worry that the crisis might arrive at US’s shore. When Germany’s share of the aid program for the Euro Zone was approved, investors were relieved and looked forward to a stop of the Euro deficit crisis. A meeting of European Union financial minsters was held to discuss reforms on economic controls and policies. This was probably seen as a sign of more action being taken to curb the crisis and helped set the stage for a bullish end of the trading week.

European Union finance minsters met on Friday to discuss ways to reform economic controls and polices. It was generally agreed that stiffer sanctions on countries with high budget deficit should be implemented. This was to prevent a similar crisis from happening again. It was reported that both financial and non-financial sanctions were under consideration for repeat violations of the Euro Zone’s deficit limit of 3% of GDP. It was reported that Germany was heading a move to remove certain voting rights of such violating countries and reservations were noted. While Germany called for a default procedure, this view was not shared by the majority.

While this meeting has great potential to improve sentiments by displaying a sign of concrete actions being done, due to the complexity of the plans, disagreements may surface and this may lead investors to see it as a lack of unity. Furthermore any measure decided may need a long period of time to implement due to the nature of the union. The situation remains crucial and any adverse developments may sent the EUR/USD crashing down again.

On a side note, an important fact is that sentiments with regards to the recovery in the US seems to be flickering as economic data starts to post disappointing results. This will be a development for close monitoring too.

Apart from the important economic events for the upcoming week, Monday will be a bank holiday for a number of European Nations. Therefore low volume conditions may be experienced. You can find the list of the various economic releases in the Economic Calender below.

If you are on Facebook, i urge you to join TheGeekKnows.com page. Discussions on forex opinions and trades can be found there.