Forecasts
Forex Guides
Members
CloseClick to skip loading
Skip to content
Good day forex traders.
This weekend is a wet one for me. The rain and wind makes my bones ache! I need my warm fuzzy days :p
In the previous EUR/USD weekly review we noted that the 1.34 line remained pivotal for the EUR/USD and that the SMA 20 might serve as an immediate resistance. Both SMAs were still downwards and the possibility of further bearish moves remained. Having said so, both the 1.32 and 1.34 might be instrumental as supports. The SMA 200 remained flat and close observation should be continued. Fundamentally the European Central Bank ECB did not lower the minimum bid rate of the euro currency and it helped to increase demand for the euro currency for now. Reports of a plan by the ECB to recapitalize the European banks was increasing optimism. However opinions regarding Greece continued to defer. The US NFP was better than expected but US consumer credit decreased, suggesting a lack of confidence to spend or an effort to pay down on debts. 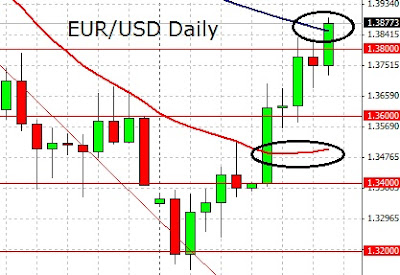 Technical Analysis
Looking at the EUR/USD chart above, we see a bullish correction since the test of 1.32. It is interesting to note that the bullish momentum is strong as it managed to break the resistances of the SMA 20 / 1.36 / 1.38 within a week.
SMA 20 = Turning Bullish
SMA 50 = Bearish
It is important to note that the SMA 20 has tuned bullish with the recent developments. Any possibility of a renewed bearish dip would depend on the currency pair’s ability to hold up against the previous resistances of 1.38 and SMA 50.
Fundamental Analysis
The euro currency is soaring due to renewed optimism that the budget deficit crisis of the euro zone will be over soon. Vows to ensure stability and the capitalization of euro zone banks are taken favorably by the markets.
Having said so, the situation is fragile as downgrades are still happening such as Spain’s credit rating cut by S&P. The IMF managing director mentioned that her current pool of funds may not be enough to meet all loan requests if the economy of the world further deteriorates. G20 leaders at a meeting urged the euro zone to act “decisively” as probably differing opinions are often seen during euro zone discussions.
Over in the US, the deficit faces a growing problem as it was reported that it has increased to $1.3 trillion in the fiscal year of 2011. Plagued by high unemployment and a depressed housing market, more must be done by the US government. The most recent treasury statement was a – 64.6B. A bright red for the US government’s balance sheet.
In the midst of all this problems, China is slowly but surely growing as an economic powerhouse. Pay close attention to developments in the far east as i believed that it would be increasingly influential.
Trade safely and watch out for important economic data due next week such as the German ZEW Economic Sentiment and many more.
Related Forex Articles from the Koala Forex Training College.
Invest In Yourself And Get Premium Analysis