Forecasts
Forex Guides
Members
CloseClick to skip loading
Skip to content
Good day forex traders.
Another wet weekend for me. Time of the year to expect chilly rains. Dreaming of a tropical beach anyone?
In the previous EUR/USD weekly review, we noted that the SMA 20 and 50 were flattening. An indication of a lack of sustained momentum, we might see ranging action. Fundamentally the Euro Zone continued to take the heat from the budget deficit problems. The call and later retraction by former Greek Prime Minster George Papandreou on a referendum on the latest EU bailout deal brought about much negativity. The cut of the euro interest rate by the European Central Bank also lowered the sentiments towards the euro currency. Italy continued to spiral down the crisis funnel. America’s slow job growth left much to be desired. 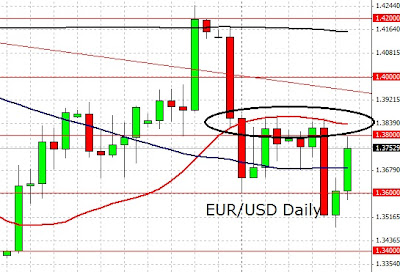 Technical Analysis
Looking at the EUR/USD chart above, we noted that the consolidation continued. Attempts to target 1.34 did not materialized.
SMA 20 = Flat
SMA 50 = Flat
With both SMAs flat, we may see more ranging action for the currency pair. We note that the SMA 20 is acting as a resistance of sorts. Uncertainty of a sustained momentum is high.
Fundamental Analysis
A number of developments in the Euro Zone is creating optimism in the markets. This is clearly evident in the equity indexes around the world.
As many Italian citizens cheered the departure of the current Prime Minister Silvio Berlusconi, approval by the parliament for measures to reduce the second largest debt in the Euro Zone is taking it well with investors. This comes at a time where Italian bonds went above the 7 percent threshold that saw Greece, Ireland and Portugal sought financial assistance.
It was reported that a majority of Greek citizens believed Lucas Papademos to be a good choice to lead the country’s interim government, formed to enable austerity measures to move forth. Sentiments are improving in the country and among the international communities.
The movements of the EUR/USD will probably be mainly steered by continued developments in the Euro Zone.
Trade Safely.
Related Forex Articles from the Koala Forex Training College.
Invest In Yourself And Get Premium Analysis