I hope you are having a wonderful weekend with your loved ones.

Last week, we saw Greece accepting a $145 billion aid solution from both the IMF and the Euro Zone partners over the weekend. This plan was supported by the ECB and Greece promised to eliminate 30 billion euros in the budget and to trim the deficit from 13.6% of the gross domestic product to within the European Union limit of 3 percent in 2014. There were growing speculations of Spain and Portugal facing budget deficit problems. Risk aversion was strong. The strikes in Greece became worse and resulted in the death of 3 people as a result of riot fires. Sentiment was so bad due to the sovereign problems and risk aversion pushed the EUR/USD below 1.26. 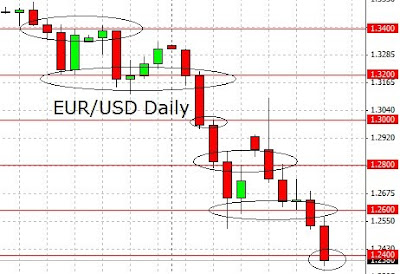 Looking at the EUR/USD forex chart above, it is clear that the bearish pressure is very strong.

This week, the currency pair received a boost in the means of a forex gap upwards of more than 100 pips. Enough to wipe out any excessively risked account. I hope you are not one of them. ( If you are, go take the Are you a Forex Koala? quiz on Facebook to see if you are learning forex the right way ! ) The boost was because of a conclusion made by the European Union on a crisis aid plan to lend as much as almost 1 trillion dollars to the worst hit nations. ECB also took a reverse and mentioned that it would ease severe strains in certain markets by purchasing government and private debt.

As much as it was hoped for, the positivity was short lived. Sentiments were negative as growing concerns were heard on the apparent inadequacy of the almost 1 trillion dollars emergency lending plan. Furthermore, investors speculated that the size of this aid plan may damage the Euro economy resulting in a retarded recovery. This might cause the Euro Zone to suffer a slower growth rate compared to the global economic stage. The extent of the negativity became apparent as we start to observe a lack of response to positive Euro economic data in the midweek. The German Preliminary GDP came out better than expected but no investors endorsed it by bringing the Euro up.

Towards the end of the week, negative sentiments with regards to the Euro became so strong that i nicknamed the Friday EUR/USD Daily Review as ” Euro Bashing Day ! ” . A former Federal Reserve Chairman said he was worried the Euro Zone may break up. Deutsche Bank AG Chief Executive Officer said that Greece might not be able to pay her debt obligations in full. The Chinese Premier said that the world recovery was not solid as the sovereign debt crisis worsened. Adding to the fires were rumors of the possibility of Germany leaving the Euro Zone this weekend and of a report stating that France threatened to leave the Euro Zone during previous negotiations. This was denied by the officials. The extent of these rumors reminded us that the Euro Zone was indeed in a crisis and we must trade safely.

I was reviewing articles and reports over the weekend and this caught my attention. ECB Trichet mentioned that the current crisis for the Euro Zone may be worse than the Great Depression. This is probably his main defense towards critics who mention that the ECB bowed to political pressure by having plans to purchase debts. In the Euro Zone concept, members are responsible for their own financial decisions. This was probably the reason why Greece’s budget deficit reached almost 14 percent of its gross domestic product without penalty. The Euro Zone limit is 3%.

German Chancellor Angela Merkel said that Europe is in a “very, very serious situation” and unfortunately this is probably true. Greece currently has debts equivalent to 115% of the GDP and economists predict that the ratio will rise to about 150 percent before it starts falling.

The Greece PM said that Greece may seek legal actions against US Banks for crisis. While an investigation into the crisis and how can it be prevented in future is necessary, it is my opinion that more crucially will be steps to prevent a worsening of the crisis. Aid funds may be secured but a concrete long term plan is needed. The threat of strikes which may hinder the recovery process remains strong. The crisis is not over. Papandreou said the decision on whether if legal action against the US Banks will be sought will be made after a the investigation into the cause of the crisis concludes.

I was paying close attention to the gold price this week. The price was raising even when the US Dollar was stronger. This is a strong clue that risk aversion is high and the markets are concerned. Gold is usually an investment of choice when the economic weather is bad.

From a technical point of view, i have circled the areas where an even number strong line appears and hence 1.2400 lies between us and the previous low of 1.2330+/-. If the currency pair decisively swings away from 1.24, a breach of 1.2330 may trigger take profits and stops. We will be then trading in relatively uncharted waters and 1.2200 may be next. The Euro Zone needs to move fast and sharp to stem the fall.

Next week brings us many important economic data such as the German ZEW Economic Sentiment / Ifo Business Climate, the US TIC Long-Term Purchases, Building Permits and more. You can find the list of the various economic releases in the Economic Calender below.