Forecasts
Forex Guides
Members
CloseClick to skip loading
Skip to content
Good day forex trading koalas.
How is your weekend? Mine is a lazy one. So tired i could sleep all day.
In the previous EUR/USD review we noted the forex gaps were still happening, an indication of market turmoil. Both SMA 20 and SMA 50 were pointing downwards and it was an indication of a bearish possibility. An interesting point to note is that the SMA 200 is flattening too from it’s upwards stance. 1.34 might be a strong support. Fundamentally the much speculated Operation Twist by the US Federal Reserve was announced but little fanfare was seen. In the meanwhile, the Euro Zone continued to face the threat of a Greek default and further complications related to the budget deficit crisis. 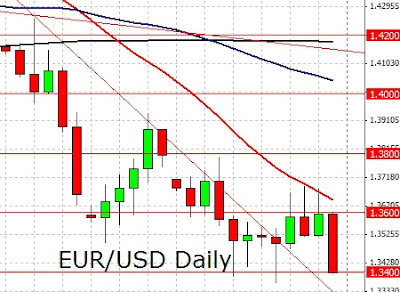 Technical Analysis
Looking at the EUR/USD chart above we note that the 1.34 line held as a support. Having said so we could see multiple attempts to break the floor and this is an indication of a strong bearish pressure.
SMA 20 = downwards
SMA 50 = downwards
With both SMAs still pointing downwards, the possibility of a continued bearish momentum is high. It is also important to note that the SMA 200 is rounding the top to become downwards soon. As an indicator for long term trend, such a development will further add to the possibility of a sustained bearish momentum.
Watch out for the SMA 20 to act as a resistance and a failure of 1.34 may bring about 1.32/1.3
Fundamental Analysis
This week stocks in Europe posted the largest weekly gain in 14 months. The successful German vote for an enhanced euro zone rescue fund reduced apprehension towards the euro zone debt crisis. What remains to be seen next would be the actual actions to be taken. It was reported that the French President mentioned that the failure of Greece would be the failure of all of Europe and due to economic and moral reasons of a possible global financial fallout, Greece cannot fail. Talks between Greece and various officials from the European Union EU, European Central Bank ECB and International Monetary Fund IMF are ongoing. The Greek Finance Minster was reported to as saying that the next 8 billion euro bailout assistance is “assured”. More economists are believing that a cut of the benchmark interest rate will be done soon by the ECB. This may further reduce long term demand for the euro currency.
Over in the US, the Federal Reserve’s Operation Twist gets underway as it announced that it will buy and sell $44 billion worth of debt in October in a bid to depress long term interest rates. While most of the US economic data were better than expected, including the below 400 000 unemployment claims, the US Non-Farm Payroll due this coming week should be closely monitored among other important economic data releases.
Trade Safely
Related Forex Articles from the Koala Forex Training College.
Invest In Yourself And Get Premium Analysis