As we begin a new year of forex trading, let us review 2011 and seek to understand a year full of up and downs. It was a year where many countries equities clocked a loss. The US is only one of the few countries whose equities clocked a positive gain. Having this understanding is crucial as this sets the basis of the financial theme for the year. 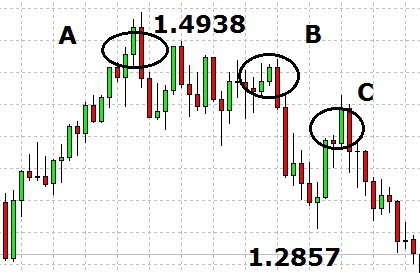 In the EUR/USD weekly chart above for the entire 2011, we can see that the currency pair basically ended the year right where it started. It was a year with much hope and subsequent despair.

In March, the japanese earthquake and tsunami took many lives and caused a 350 billion dent in the economy.

The US debt ceiling crisis in August came about as policies makers failed to come to an agreement until the very last moment. This and among other reasons costed the AAA rating of the US. A downgrade largely ignored by the markets as seen above. The US Dollar apparently remains the definitive choice of asset to hold during times of risk aversion.

Referring to Point A above, the EUR/USD had been gaining due to improving optimism. Right about that point in time during April – May 2011, Portugal sailed into financial difficulties and concluded that it needed external assistance for it to cope with it’s debt. A 78 billion euro bailout was approved by the European Union and the IMF. This brought about negative sentiments and speculations were wild including the rumor than Greece might leave the Euro Zone. This marked the start of stormy waters for the currency pair.

Around August 2011 at Point B, there were warnings that the budget deficit and debt crisis was spreading. Yields rose as investors demanded more in return for the risk of holding the debts of troubled nations like Spain and Italy. Risk aversion strikes and the EUR/USD dipped sharply. The many negative statements and outlooks of the Euro Zone made the situation worst. The Euro Zone seemed poised for a 0 growth period.

Point C marked a period of renewed optimism around October 2011 as there were speculations that the European leaders were working on a solution to salvage the European banking system. The European Central Bank ECB announced emergency actions of loans to help banks and it was reported that Germany and France came to a conclusion on an action plan for the region. Having said so, failure to push ahead with concrete actions disappointed markets and setup the continued descent and risk aversion right to the end of 2011.

As you can see above, i mentioned during the many forex forecast reviews that the Euro Zone budget deficit crisis would probably be the main trading theme for the year and indeed it was so. Should current conditions remain the same, i expect that this crisis will probably continue to dominate much of the sentiments in trading for 2012.