soon it will be the end of the week and i hope you are green with profits! Making money in forex is never easy

Yesterday saw the Euro Zone delivering some positive news. Portugal did a successful bond sale and both Spain and UK came out with plans to cut budget deficits. However observation of gold told us a different story and indeed Moody’s Investors Service cut the ratings of $28 billion of Greek bonds and had them on review for further downgrades. The German Preliminary GDP was better than expected but not much reaction was to be seen. 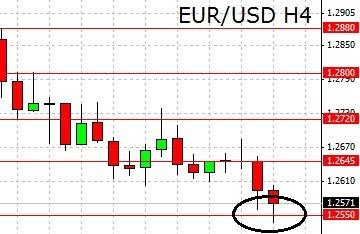 The EUR/USD slides further and was seen testing 1.2550. I LOVE IT WHEN MY CHART WORKS!

A quick look at the equities index shows us that the S&P 500 is recovering from the recent dip.

Oil in the meanwhile hovers around $80. I pay attention to the oil prices as oil can be a clue to the global economy well being.

While bank holidays are in effect in a number of Euro countries today, the world continues to revolve. Growing tensions are reported in Spain and Portugal as their governments move into action to reduce budget spending. The Spanish PM announced a 5 percent cut in public salaries. The largest union, Comisiones Obreras, mentioned that it is planning a ‘‘massive” response to the “unjust” reductions. In Ireland a number of protesters who were marching against the government’s intention to rescue the country’s banks attempted to storm the parliament. The situation in the European Union is fragile and close monitoring must be done.

Over across the Atlantic, the US unemployment claims were slightly lesser than the previous month, suggesting apparent improvement in the job markets. While this may be true, this may also be the usual fluctuations. The US deficit remains high and the unemployment rate is still clocking in at 9.9%. While the media is tuned onto the Euro crisis, be careful of any shift in attention.

Fed Chairman Bernanke is due to speak in public later and hence do be careful with your trades. Investors usually pay close attention to his speeches and try to decipher clues to future policies. Tomorrow bring us a number of important data including the US Retail Sales. Retail Sales is a good indicator of consumer health and of which can be an indication of the economy’s condition.

Remember though, support and resistance lines are never a single pip.

Spending many hours today, i finally finished up 2 Facebook quizzes, 1 Facebook game ( Margin Call Wars ) and a application to send your regards to a forex buddy. Exciting indeed. If you are not already on TheGeekKnows.com Facebook page, do so now. We have almost 400 koalas there and many discussions going on.